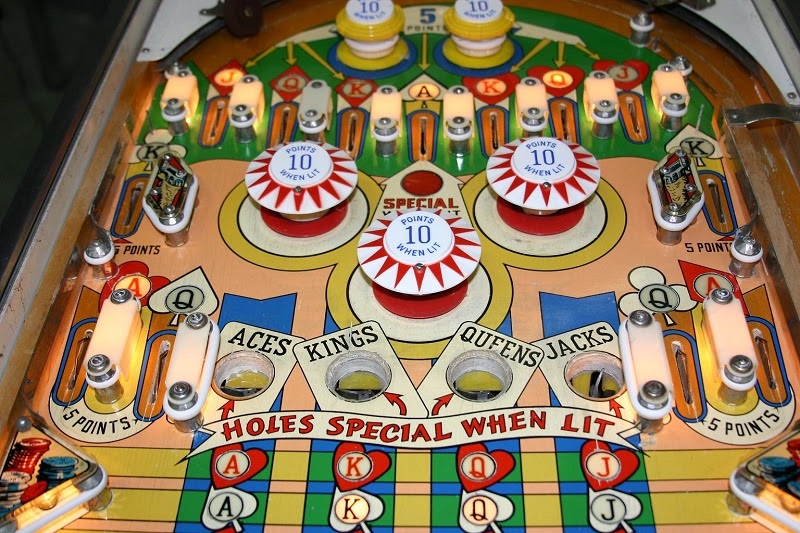 Hello,
I would like to introduce a Guest Post from a fellow blogger who shares a story about an unexpected encounter …over to you…and thank you Shady Del Knight.....

Shocking True Confession! I Was the Dell's Pinball Wizard.....Not a Deaf or Blind Kid...Just Dumb!

How do you think he does it? (I don't know!) What makes him so good?

Did you ever get so good at something that you could practically do it in your sleep? That’s how it was with me and pinball, especially when it came to playing the machine at the Shady Dell, the hangout for teenagers that I frequented in the 60s.  Over the years I played hundreds of games of pinball in the Dell's snack bar.  I became so skilled that winning free games was a breeze.  Practice makes perfect, but perfect sometimes makes enemies. As it turned out, I was too good for my own good!

One afternoon I was deep in concentration in the middle of a pinball game when suddenly a large hand appeared in front of me. The giant claw turned palm downward and loudly clacked several coins onto the glass. “You done soon?” was my interpretation of what the deep voiced stranger uttered. “Oh, yeah, I should be,” I replied as I continued to play. The guy repeated his words, only this time much more slowly and assertively, and this time I got the message loud and clear. The dude wasn't asking me...he was telling me.

“YOU DONE SOON! ME PLAY PINBALL!"

I glanced to my right and there stood a 6-foot, 5-inch, 250 pound Goliath who looked like a bodybuilder, a pro wrestler, a Baltimore Colts line-backer, a Green Beret and a beer joint bouncer rolled into one.  My stress level shot through the roof when I noticed that there was not one guy standing there but two, and the second burly brute made the first one look like Mini-Me! Both behemoths looked angry.

In seconds I came down with a terminal case of dry mouth and broke out in a cold sweat, hands clammy and knees knocking. I knew it would be a fatal error in judgment for me to keep those gentlemen waiting. I elected to do the right thing and deliberately throw the game - take a dive, as it were - but I didn't want to be too obvious about it.

At first I tried to change my timing so that the flippers would swing too late and miss the ball, allowing it to go down the loser hole. It was no use! After thousands of hours of practice my eye-hand coordination could not be defeated.  Without intending to I kept flipping the ball back up to the top of the playfield.  I simply could not not do my best. I was hardwired to win!

Realizing that it was time to take drastic measures, I shifted into E.A.M. (Emergency Abort Mode), completely removing my hands from the flipper buttons.  Having done so I expected the ball in play to make a beeline for the hole. To my utter amazement that (expletive deleted) machine simply refused to quit.  It seemed possessed by a demon hell-bent on my destruction!

Without any flippers flipping, the bumpers somehow kept bumping, the slingshots kept slinging, the targets kept dinging, and the free games kept popping. The Shady Dell pinball machine was literally playing itself!

With a litany of four-letter words being hurled by the livid lads standing beside me, I made the brilliant deduction that The Amazing Colossal Man and his pal Dellzilla were not amused by my magic trick.  They were measuring me for a casket!

Deciding that it was better to be a live coward than a dead pinball wizard, I gave up trying to get the ball to drop and made a hasty exit, stage left.  I headed out the door and down the path toward the dance hall hoping to get lost in a sea of faces in case the incredible hulks came looking for me. As I walked away in humiliation I could still hear that stubborn hunka junk defiantly dinging and popping!  I hated having to leave behind a dozen free games of pinball for those husky hijackers to inherit, but I had the last laugh......they were gonna have to stand in a puddle to play them!