Distracting himself, he looked at his clock and thought it was almost time to call. He usually rang reception to be put through to her. He couldn’t time it exactly, so she’d be free to talk, often, though she was.

As he called, the familiar ‘beep, beep’ left him anticipating the connection he was about to make.

“Hello, welcome to Mary Hares, you’re speaking with Raven, how can I help?”

“Hello, could I please speak with Rose-Bud?”

“Won’t be a moment, I will see if she can take your call.”

He waited expectantly as the elevator music sprung to life as he was put on hold.

And then he heard, “Hello, Rose speaking.”

Delighted Rose said, “Jac, it’s lovely to hear from you. How can I help?”

He paused and then added, “Thanks Rose, your help is always appreciated.” Wanting to continue the conversation, he said, “How are things in Rotono?”

“Good, thanks for asking, Jacaranda.”

He laughed when she said his full name.

“You know what, you’ve spoken to me so many times now, call me Jac.”

Laughing Rose, said “Yes, Jac it is. Jacaranda’s are beautiful though.” 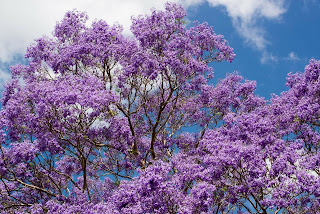 “Yes, I grew up surrounded by Jacarandas and moved north to the coast during my service.”

He went on, “Mum loves Jacarandas and she named me after them. I did get a bit of ribbing for it – but you know, he said wryly, you always take hits for Mum.”

“How funny,” laughed Rose, “It seems Mums have a thing for blossoms. My name’s Rose-Bud and I go by Rose.”

They both laughed at their similarities before Rose realised her talk-time was blowing out, “nice chatting.”

As they rang off, Jac focused on his photos.

Rose finished her shift and raced to her car.

It didn’t matter where she was, the light never disappointed as she glanced up at the pink hues amongst the wispy clouds.

Keen to get home to work on her canvas she sped through traffic. She’d been out in the reserve and snapped a kookaburra resting on a snow gum which she was painting. 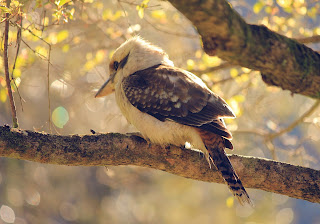 Her thoughts switched to Jacaranda, or Jac as he liked to be called. She enjoyed the calls and was flattered he asked for her and since she noticed the time he called was roughly at the same time, she worked it so she’d be free to take the calls.

Smiling, she couldn’t help but think of the similarities they shared from their names to where they lived – even though she didn’t live on the coast, she did spend a good deal of her life there, especially since her parents had retired there and more so now after the break-up with Will.


She was relieved in many ways Will had initiated it. She’d been thinking about breaking up with him for years, especially after he got in with a druggy crowd and spent his days smoking bongs. It got worse when he brought his mates around and they encouraged her to share a joint with them. She didn’t want to, but Will encouraged her. Then when he came home one day and delivered the news, she was mildly relieved. She thought he’d realised he could handle it as she suspected he was seeing someone, for months prior to making the announcement. It still, though, had been a difficult time for her being with him for eight years and she spent a lot of time out running in the reserve and spent time by the ocean – the rejuvenating effects gave her courage to move forward.

As she delicately applied feathery strokes filling out the kookaburra’s beak, her thoughts turned to Will and their dreams of a life together. She took the break-up harder than she had anticipated and she realised how dependant she’d become on him.

One morning, though, she recalled about one year after the split, she awoke and accepted that she was alone. It was then she applied and got the job at Mary Hares.


Sighing, she put down her paint brush and looked outside across to the distant mountains…....

The next day at work, it was business as usual for Rose. As the afternoon approached, a call came through from reception.

“Hello, Rose, are you right to take a call? It’s from Jacaranda Holdsworth?”

With that Raven transferred the call and it wasn’t long before Rose heard Jac’s familiar voice.

“Rose, thanks so much for taking the call.”

There was silence as Rose waited for Jac to speak.

He trailed off, making up a question as he only called to…. hear her voice.

He continued, “I’m looking to buy property and a balance on the account will help…”

As she did, Rose said she’d never visited that part of the world where Jac lived. Instead, she said that a lot of her time had been spent on the coast a two-hour drive from Rotono.

She went on to say, her mother had planted two jacaranda trees at Bagola, and they had grown to be massive shade trees, and it was now, early summer that they displayed their brilliant purple-blue blooms and she was travelling down there tomorrow for the weekend.

She repeated, “It’s Bagola,” Jac, Vincent St – first street back from the turnoff.”

Jac roughly calculated the distance by car and reckoned if he set off at 6.30 am tomorrow morning he’d be there by late-afternoon.

“I’ll send that balance off to you now and in no time, we’ll be buying you that new property.”

Clearing his throat, Jac replied, “I better go Rose, just realised I need to fill the car up – as it turns out I’ve got a lot of driving to do tomorrow……...”

Posted by Allie-Millie at Thursday, September 12, 2019