Reg works casual shifts so has time to indulge his passion. He often goes down to Jerry’s on 7th Street, a two-storey music shop housing acoustic and electric guitars, drum kits, grands and baby pianos and a plethora of other musical instruments on dazzling display, seductively enticing even the most musically inept.

On the upper floor, rows of music books, arranged in genres from rock, to jazz and blues through to classical music, suited to any type of musical instrument are easily located. The books open up to the well-known tunes of pop and rock stars, inviting unrestrained pleasurable abandonment in playing a chart-topping tune.

Such an activity becomes a daily life-enhancing ritual, feeding souls and morphing into a healthy outlet as we traverse the inky landscape of surprise and intrigue, mindful in all that we may encounter as we journey and ride life's rapids.

Shelves in the music store are stocked with a range of strings for guitars, banjos, violins and cellos. The boxes line the walls close to the counter. They are neatly catalogued ensuring easy access for assistants, themselves seasoned musicians, living for music, entertaining appreciators, who know only that the sound is pleasing.

Reg takes his usual circuit around the store, slipping inside quietly, unobtrusively, not seeking to draw attention to himself. He moves casually along its sides, exhibiting an appearance of nonchalance at being in Jerry's; the jewel of music stores.

Reg's manner, however belies his true feelings. He is desperate to move swiftly to the back of the shop where electric guitars glisten and sparkle, enticingly in the dimmed lighting. An amp is freely available for those seeking a demo.

Today Reg has come with purpose. He has visited the store each week for the past six months, running his fingers across the line of guitars, settling on frets and choosing a Tele, plugging it into the amp. Each week, he selected the Tele, performing a different riff and putting it back again before leaving the store empty-handed.

Now he moves slowly towards the back of the shop giving the appearance of simply browsing and not particularly intent on buying anything in particular. He reaches the stringed instruments and excitement stirs.

He moves to the amp and plugs the Tele in. Putting the strap over his head, he pulls a pick from his back pocket and positioning the guitar on his hip, he slides his fingers up and down the neck. Selecting the middle pick up Reg belts out a well-known rock classic.

He's intoxicated and moves his body to the rhythm of the riff, grinding his hips and moving the Tele in an upwards movement. He closes his eyes and allows the sensations to wash over him, filling him with an inner confidence so powerful he feels as if he has almost supernatural abilities.

He embraces both the pleasurable activity and the metaphysical experience so intently that he envisages himself performing in front of a sea of people. Their unifying sounds of applause are so auditory, he feels the moment may further transcend him.

Reg does not realise an assistant is at his side, speaking with him until the person is standing directly in his line of vision. Reg stops the music abruptly. He pauses before speaking. "Oh man," he says, "the Tele does it to me every time."

The assistant laughs and says he has good taste and plays a good riff. Reg now having bounced back into reality, says, "Yes I'm takin' her today." They high five and connect on an intimate level known to those with a shared passion.

Reg walks towards the front counter, past the pianist twinkling the ivory keys on the grand piano.

With the Tele still strapped to his body, he reaches into his pocket and pulls out his wallet. He gets served immediately and hands over the cash he has painstakingly saved over the past six months. Out the door he goes with the price tag still attached.

The shiny, dazzling Tele he fell in love with six months ago but had to walk away from each time, Reg is now taking home where he can repeat the exquisite experience he just enjoyed time...and...time....again. 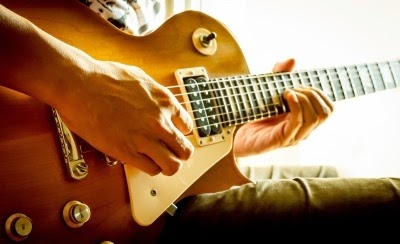