Shoulder to shoulder with other runners, a final announcement was made and Ric told Sara, the pistol was about to be fired.

Excitedly they both waited. At last, Sara’s long-held dream would begin. Smiling, she looked over at Ric, squeezing his hand.

Suddenly, the pistol’s ping rang out and the crowd’s roar travelled the depth of the route.

Sara and Ric found they were not moving as the number of runners in front made it impossible for them to walk, let alone run.  They could only step forward slowly as the crowd dispersed. Sara looked down and thought if she tripped, there’d be little opportunity to get up as the energy of the runners surged behind her, impatient at the race’s delays. Thoughts of being crushed crossed her mind.

As the front of the pack opened up, the race eventually gained momentum, giving them room to finally run.

Flags, balloons and streamers flashed by Sara as she ran its course. The rush she got from the roar of the spectators fuelled her pace.

Early on Ric was already lagging. She was torn between running her own race and running beside him. Slowing down, allowed him to catch up.

Without losing her focus, she replied, ‘No, we’re running together, 20kms, all the way.’

With that she adjusted her rhythm and they ran side-by-side.

Their pace was steady and with the inclines behind them at the 10km mark, the next 10kms would be the flat part of the course.

This made sense since most runners would have maximum energy at the beginning to tackle the route’s more difficult terrains. When energy and stamina were failing, the final legs, flat and smooth would offer relief and a belief that the race was within reach.

They’d been running for 75 minutes past the half-way mark, slower than their average during training. Sara pulled back as Ric shuffled rather than ran.

Their training, though had given them the confidence to dig deep and find the reserves needed to cross the line. Sara glanced at Ric and saw he was puffing heavily.

‘Steady,’ she said between breaths. Water signs displayed along the route indicated a station was 1 km away.

‘Water ahead,’ said Sara. She continued, ‘only 8 kms after the station, Ric.’

Labouring under the strain, he did not talk.

Sara slightly worried said, ‘Ric, we can stop at the station.’

Her heart sank at the thought of bailing but she could see today wasn’t his day.

Without speaking, he waved as if rejecting any thoughts of stopping.

She continued on silently.

Snatching cups of water from the tables she guzzled their contents throwing the empties into the bin. Ric behind her did the same. 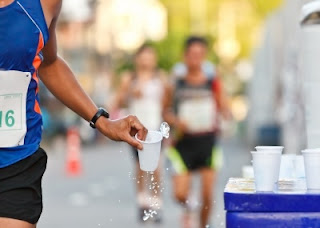 Buoyed by the thirst quenchers, it was almost as if Ric found a second wind and motioned to Sara to continue. Smiling she shouted, ‘that’s the spirit!’

They continued on as runners passed them and Sara slowed as Ric switched to shuffling again and with only 5 kms to go, Sara cheered, ‘not far to go.’

Waving excitedly to the spectators lining the final stretches of the route, she felt as if she could run for another 20 kms as the joy she felt as she visualised crossing the line gave her almost super-human strength. Anticipating the finale just ahead of her, she pumped the air with her fist.

As they rounded the final bend, she had a clear view of the banner emblazoned with the words FINISH. Crossing this would mean her hard work would finally come to fruition.

Wanting to share her exhilaration she looked over at Ric. Emitting a deep rasping sound upon seeing his colouring and the difficulty he had in breathing, she shrilled, ‘Ric, are you okay?’

Forcing himself to answer, he said, ‘Go ahead Sara, I…I can’t continue.’

As she began to speak, he stumbled, falling onto the road.

Writhing around, he said, ‘Sara, please go finish the race.’

Within seconds, Sara debated within herself whether to run the 800 metres, cross the line and run back to Ric. It was within her sights and her goal would be completed but she hesitated as she would have to run against the racers. Dread gripped her as she thought of Ric if she left him alone.  Instinctively, she knew she could not run off.

Dropping beside him she asked where it hurt. He pointed to his abdomen and it was then she waved frantically to a nearby marshal.

He nonchalantly walked her way and crying she said, ‘My friend is very ill, please hurry.’

‘Ok, ok,’ he said, and as he got closer, he could clearly see Ric’s distress and made a call. Within minutes, Sara could hear sirens as an ambulance drove through the crowds. 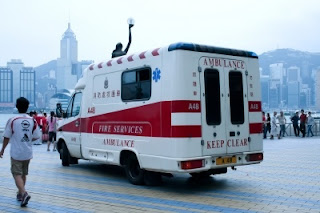