It was dark as they began the 300kms+ journey to the Gallipoli National Park. Still sleepy, Sara could not believe how the strange encounter with Ric in the supermarket over six months ago had transpired into this fantastic journey now. She looked over at Steele sitting beside her and thought about the kindness of strangers.

Ric did not join them, deciding instead to use the day to catch up with old friends. Sara was disappointed. Fortunately, she found herself with an equally compatible companion in Steele.

They were heading directly to the Gallipoli Peninsula following the Marmara Sea coastline. The drive would take several hours.

As she looked again at Steele, she softly said, ‘Steele, this is so exciting, to actually visit. It’s folklore.’

Steele paused and then launched into a historical oration about Gallipoli.

‘Yes, the battle, it is a big part of Turkish history, the land grab and the Turks fight to retain ownership of their country. They lost around 60% of their soldiers.…’

He went on, ‘A naval offensive was launched to open up the supply route to Russia at the entrance to the Dardanelles, via the Sea of Marmara, Bosphorus and the Black Sea.’

Continuing, he said, ‘When this failed an invasion of the Gallipoli Peninsula began and it was a baptism of fire for the Anzacs on the cliffs as the naval offensive did not achieve its objectives.’

Sara listened as he relayed these facts, gaining greater understanding of its causes.

After a while, he changed the subject, speaking freely about his love of working in Turkey being in the Corps and the lifestyle.

Sara nodded chatting it would be wonderful living in a foreign land. Together they witnessed dawn breaking as light descended across the olive yards adjacent to the road.

After a while, Sara asked Steele if he had anyone. She paused and continued, ‘well I haven’t seen…a partner…’

Embarrassed, she trailed off.

He told her, he sort of had one, that he’d met her in Stockholm.

He went on saying it was a bit difficult since her life was there but that she planned to maybe visit later in the year.

After a while Steele looked her way and smiling said, ‘We are almost there, Sara.’

Shifting her body weight she replied, ‘fantastic,’ returning a smile.

As they approached the entrance to the Gallipoli National Park, Sara was struck by the beauty of the region with the Aegean Sea a stunning backdrop to the sweeping vista across the Peninsula’s coastline.

The vegetation was a mosaic mix of pine trees, yellow and white wildflowers with red poppies scattered amongst the native flora, thriving in the Mediterranean climate.

Steele said there were 31 war cemeteries on the Peninsula and he asked which one she was looking for. She grabbed her bag and retrieved the piece of paper her father had given her.

She read aloud the words, ‘Killed in action running through the sap (trenches) to finalise the withdrawal, grave unknown, memorial site - Lone Pine.’

Steele motioned to the driver who pulled the car over.

Steele said, ‘We can now walk to the cemetery, Sara.’

They got out as Steele said to the driver ‘yalnız çam.’ (Lone Pine)

As they walked towards the hilltop, thousands of simple plaques could be seen across the headland.

As they got closer, Sara spotted a single pine tree, symbolic of the lone tree sighted by the Anzacs at the landing on 25 April 1915.

Sara slowly walked along each row, incredulous at the bloodshed of Australians and New Zealanders.

As she began shivering, Steele came close and put his arm around her. Finding a tissue, she wiped her nose.

‘What number are you looking for?’ he asked.

Silently she showed him the piece of paper and mentally Steele counted.

‘Sara it’s over this way more.’

They walked towards the headland, turned right at the 15th row and walked along its middle.

Sara stopped, whispering, ‘It’s this one.’

She dropped to her knees and ran her fingers along the lettering on the plaque.

Steele knelt beside her. After a while she whispered, ‘such horrible losses.’

Sara wiped her eyes and they both stood up. Facing the headland, she wondered where there could be so much beauty, there was also bloodshed.

He stopped a few metres away from them. The paper fluttered as he handed it to over.

The driver gestured in Sara’s direction and Steele handed it to her. They both waited and silently she read it, gasping while clutching the paper to her chest.

Speaking softly, the driver said to Sara, ‘Your pain is our pain.’

Nodding, she said, ‘Thank you.’

Stepping backwards, he quickly turned and ran towards the cemetery’s entrance.

After the driver had gone, Steele asked Sara, ‘What was it?

Without speaking, Sara handed him the paper.

Steele read it and when done, he stepped towards Sara, holding her close.

They held this pose for several minutes. After a while, she asked if he would read it again.

‘In the words of Kemal Ataturk - those heroes that shed their blood and lost their lives - you are now lying in the soil of a friendly country.

Therefore rest in peace. You, the mothers who sent you from far away countries, wipe away your tears, your sons are now living in our bosom and are in peace. After having lost their lives on this land, they become our sons as well.’

He folded the paper and together they walked towards the cemetery’s entrance. 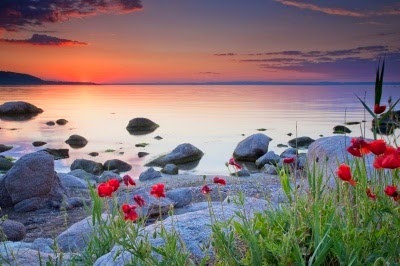