Re-posting this short story about an Australian boy Lloch who loves skateboarding. It is about loss, friendship and determination.

I remember good ol' Ben; the earliest memory of him is still fresh in my mind. I'd call him Benny; he'd call me Lloch (short for Llochlan). We used to hang out at the skato, we'd ride our boards right through the night at our beloved skatepark, learning new tricks and building our ambitions of goin' pro.

Mum wouldn't let me out at the skato late so I usually had to sneak out. Benny didn't speak much of his folks, he just hated goin' home. Almost every night we'd meet up at the skato so Benny could get away. Me? I didn't like home much either, mum always fightin' with her boyfriends and the place was always noisy.

It wasn't always easy sneaking out; I had to be real quiet. Mum would stay up late sortin' out bills, sometimes she would sob. I didn't care much about mum, always bringin' strange men home. I wasn't sure, but Benny had a worse home life, sometimes he'd come to the skato with big bruises on his arms. Knowin' Benny he denied the very existence of them.

I wonder what Benny is up to now.

I set my board up on coping of the quarter pipe and dropped in. I was coming up to the down rail and went for a big ollie. While I was in mid air I could feel the exhilaration. My board hit the rail, it felt good. I could feel the friction of wood against metal, I was intoxicated, but then I blanked. Next thing I know I wake up to the yelling of Benny's ocker accent.

"Mate, get up! I told you that you weren't good enough." "Oi bro I got closer than you would have," I said.

Benny took that as a challenge.

Benny prepared for the drop in, he went down it like I did, he ollied his board, hit the rail smack bang in the middle. It was perfect; the clang of the metal was music. He landed and rolled off, like it was nothing.

"That was fuckin' good, how'd you do it," I said. "It was easy, you just gotta not be a pussy, hahaha," replied Benny. I said in reply, "It's a shame your parents don't give a shit about your skating. You're good." "Hey! Don't fucking mention my parents, I hate 'em." said Benny.

I noticed Benny had a bruise on his arm. I wouldn't dare mention it as he seemed mad enough. I guess that's why he was pissed off that day. He isn't usually angry. He always seemed to get really defensive when I asked him about home. Guess I can't blame him; the way he would do whatever he could to stay away.

The next day I stayed home. Mum wouldn't let me out because she caught me sneaking back in early next morning. It wasn't all bad; my mum's boyfriend was away.

I stayed in bed. I envisioned the board slide I attempted the day before. I tried to re-live the adrenaline which intoxicated me. It was very vague in my memory. It was ecstasy. It was a feeling I was determined to experience again.

My mum's boyfriend came back the next day with all the arguments between my younger siblings and my mum and her boyfriend. It didn't seem fair that I had to put up with such shit.

Next opportunity, I sneaked out and went to the skato. It was the middle of the night, a bit foggy but I didn't mind. I thought Benny might be there. I decided it would be better if he wasn't so I could practise. When I arrived it was empty. All you could hear was the sound of the ocean. It was good. I got my board ready on the coping, dropped in and went for the ollie just like last time. Before I hit the rail I kicked my board away out of fear, somehow after the last time I tried to boardslide the rail it made me scared and I couldn't do it. I felt bad because of what Benny said to me - "It was easy, you just gotta not be a pussy, hahaha."

It echoed within me because I looked up to Benny. He was my best pal. I then realised I wouldn't experience that "feeling" again unless I did the boardslide. I continued to skate about the park.

A car filled with people pulled up. Three people got out and started walking towards me. I didn't know what to expect. They asked me politely if I would give them my skateboard and money. I said no and ran. Well they chased me, beat me up, took my board and drove off. It was the worst experience of my life. I ran back home in fear and anger. I didn't bother sneaking in because I was hysterical. I just walked in and went to bed. My determination to do the boardslide had faded. I felt like Benny would be really disappointed in me and I couldn't stop myself from sulking as I went to sleep.

I didn't leave the house for weeks. I hadn't even thought of Benny in months and one day he showed up to my house asking for me to go to the skatepark with him. I told him my experience of getting bashed but he told me to come anyway. I couldn't say no. I hadn't seen him in months.

We both talked about what we had been doing the past few months. Benny hadn't been so good. His parents didn't hit him anymore but they didn't even acknowledge his existence. I wasn't afraid of the skatepark anymore but my skateboard was taken so I couldn't skate.

The women said, "Are you Llochlan, Ben's friend?" "Yes I am. Why do you have his board?" I replied. "I'm Ben's sister. Ben has committed suicide and left you his board. Sorry." **she walks off**

The next night I was full of emotions. I wasn't afraid of anything. I stormed out and walked to the skatepark. I looked at the rail and was determined to do the boardslide. I fiercely put my board on the end of the coping and went for the drop in. The anger was rushing through me as I did an ollie up onto the big rail. While I was in mid air I slammed my board directly in the middle of the rail, the clang of the metal was like music, just like when Benny did it.

At this point I was intoxicated; the extreme exhilaration ran through me, an ecstatic feeling. The board was grinding against the metal as I swiftly flung the board off the end of the rail and landed on top of it and rode away. I felt total serenity, like never before. I felt like I did Benny proud. I could feel his presence as he watched me and I thought "I wonder what Benny is up to."

The author feels intoxicated and exhilarated in the middle of a trick, like nothing can stop him. He based the story around skateboarding because he could identify with the characters. It reminded the author of the time when he got into drugs, trouble and struggled at school and it made him feel bad. He was a good skateboarder and this boosted his confidence. 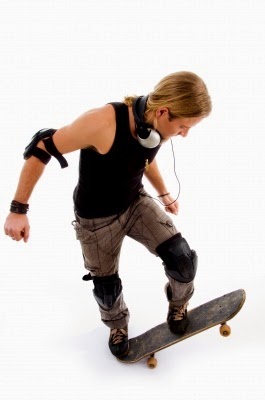 Image courtesy of imagerymajestic at FreeDigitalPhotos.net